Although one approach delivers a great finish, the other method is still very aesthetically-pleasing – and more suited to our urban environment. Here we focus in on these two techniques, examining their origins, how they developed and how they are now used.

The first written records pointing to the existence of tools specifically designed for producing sawn veneers date to the middle of the 18th century (plans and elevation drawings for a specific kind of ‘moulin à planches’, L’Encyclopédie, Diderot et d’Alembert), while the first circular saw appeared in England in 1794. At the time, the making of veneers represented the bulk of a cabinet-maker’s business. It was so important that competitions were organized in workshops to see who could produce the largest number of sheets from an inch of wood. These contests were useful in that they led to improvements in techniques, better quality saws, better approaches to saw sharpening and improved cabinet-makers’ skills. An invention by a native from Auxerre was to revolutionize the sawn veneer method, which, up till then relied upon a hand-operated frame saw. The so-called ‘rising wood’ saw made it possible to cut sheets, leaves and veneers much more thinly than before.

Other innovations followed, such as the band saw in 1807 and the wood-slicing machine in 1825. For the first time, this method employed water, which opened the pores of the wood and softened its natural colours…

In 1835, the rotary veneer cutting machine was invented, which acted as a springboard for substantial progress in the field. It was improved on thirty years later by Garand, who had the ingenious idea of boiling the wood beforehand in order to make it more flexible. This development enabled the production of leaves of a length of tens of metres and a width equal to the length of the log being processed. This is how the sliced veneer method began.

SO, WHAT’S BETTER, SAWN OR SLICED?

The sawn veneer technique is still in use today, but infrequently so – mostly for restoration projects or to make very high-end furniture. Its main advantage is it preserves the wood’s natural look, as connoisseurs will be able to tell.

In relation to sliced veneers, although the log goes into a steam room or hot water bath to have its sap removed and consequently loses its original colour, it can still be cut into thinner leaves – up to 6/10th size.

The veneers are glued to panels made from a different material, which results in greater stability than is the case with solid wood.

As you’ve seen, we tend to use sliced veneers more frequently (wall panelling and wainscoting, furniture and doors). These veneers strike just the right balance between aesthetics and technical performance, delivering durability, a natural, warm look, the option of being used on large surface areas (entrance halls, living rooms…) or to create a feeling of coherence across a range of furniture in terms of colour and texture. We would also stress that this technique brings the spotlight back onto the use of wood on large areas as a means of giving a personal touch to a project, making the most of the sheer quality of wood as a material and creating a cosier atmosphere.

At the same time, the execution of this technique needs to be absolutely flawless! It demands a very special know-how and specific expertise in jointing and matching. This is why some of L’Ébénisterie’s workshops are given over to veneers, with very high-tech machinery (veneer clipper, veneer splicing machine, hot veneer press). A team of three guild members who are past masters in the art of veneering are perfectly at ease with the whole process, from A to Z (cutting, assembling, jointing, gluing). We don’t subcontract out our work! Our team is well-placed to select the logs that will enable them to give the clients what they’re looking for. When veneers are custom-made, the cabinet-maker is entering haute-couture territory! 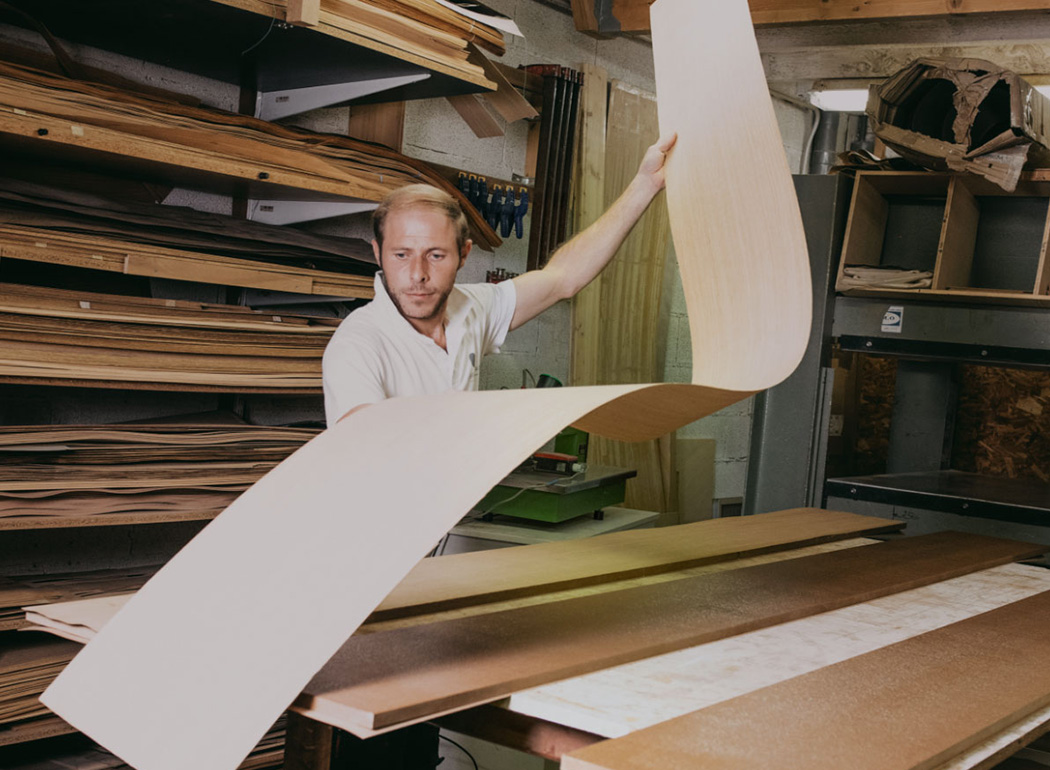